Jenny Nilsson, President of the Youth Section of the World Federation of the Deaf, addressed the UN on December 4th for the Inauguration of the UN Accessibility Centre. She sat on a panel that included Secretary-General Ban Ki Moon, John Ashe, President of the UN General Assembly, and Kang Seong Ju, Director-General of the Convergence Policy Bureau of the Ministry of Science, ICT and Future Planning of Korea. As a young deaf woman herself, Ms.Nillson spoke on behalf of young persons with disabilities.

Ms. Nilsson conducted her presentation in sign language which was then voiced by an interpreter. The sentiments she presented were focused and passionate. “We young people with disabilities want to be involved, and have a right to be involved in decision-making processes, including the post-2015 development agenda. We have something to say, we have something to contribute, based on the various barriers we face in our daily lives and the ways we adapt, the solutions we find to make society accessible and inclusive for us. It is often said that young people are the future. Yes, we are the future – which is precisely why we need to be engaged today”, she stated. 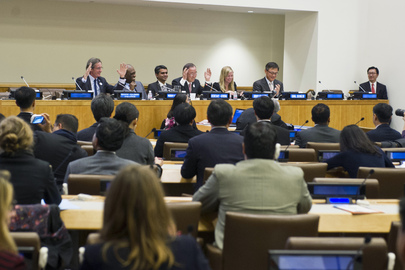 Ms. Nilsson went on to encourage decision makers to listen to young persons with disabilities. “Over the years, I have seen firsthand how few young people with disabilities are involved in UN processes because of a lack of access, often linked to a lack of resources or poverty. Including me, a young deaf woman in this ceremony signals that we have to say matters ”, Ms.Nilsson said.

We use cookies to provide you with a better customer experience. Accept Read More
Privacy Statement
Necessary Always Enabled
Secured By miniOrange